DNA profile comparisons between Irish Wolfhounds from different continents showed that these profiles are nearly identical, whereas the dogs concerned are not at all related in a direct lineage.

Some of the reasons for such a small gene pool include:
Closing the stud booksInbreeding and close line-breedingUsing Matador sires (males that were used a lot based on their prominence in shows)Even breeding exclusively with healthy tested dogs has had a negative effect on the gene pool.When a breed only has limited diversity in its alleles, the natural capacity for recovery will soon dwindle.

In the course of the years of official breeding, the above mentioned facts have resulted in our impressive and beautiful Irish Wolfhounds, but also made their health and inherent lifespan a lot less impressive.

Always make the breed and its health priority number one.Working together with scientists and breeders in assessing which research studies must be performed in order to improve the health of the breed where possible.Trying to keep the genetic package as diverse and the breeding basis as wide as possible.Outcrossing to a different breed

Because apparently there is not sufficient diversity within the breed itself, the only way to go seems to reintroduce a healthy diversity in the gene pool by outcrossing to a different breed. Once proven suitable, those outcrosses can carefully be reintroduced into the breed.

The movie ‘let there be genes’ made by Henny van den Berg, gives a clear view of the positive genetic effect such an outcross can have. At the end of the film you see photos of the offspring of the outcross of Irish Wolfhound x Alaskan Malamutes that has been done.

What we gain with these outcrosses, is a positive influence on the gene package, because the introduction of completely foreign genes for the breed will turn negative homozygote alleles back into heterozygotes. Having multiple heterozygote alleles is always better for a breed and will increase its resistance. In a breed that mainly consists of homozygote alleles, there is hardly a chance of breeding away from a defect and sometimes it is truly impossible.
It all sounds a lot scarier than it really is, for in three generations the outcross offspring are recognizable Irish Wolfhounds again.

In short, such an outcross can provide a huge, positive boost to the current genetic package, giving it a chance to recover towards a more originally diverse package which might possibly bring us one step closer to better health.

And this is exactly the focus of Stichting de Ierse Wolfshond: Where possible try to improve the health of our breed. Through the outcross project the foundation hopes to make a positive contribution to the breed. 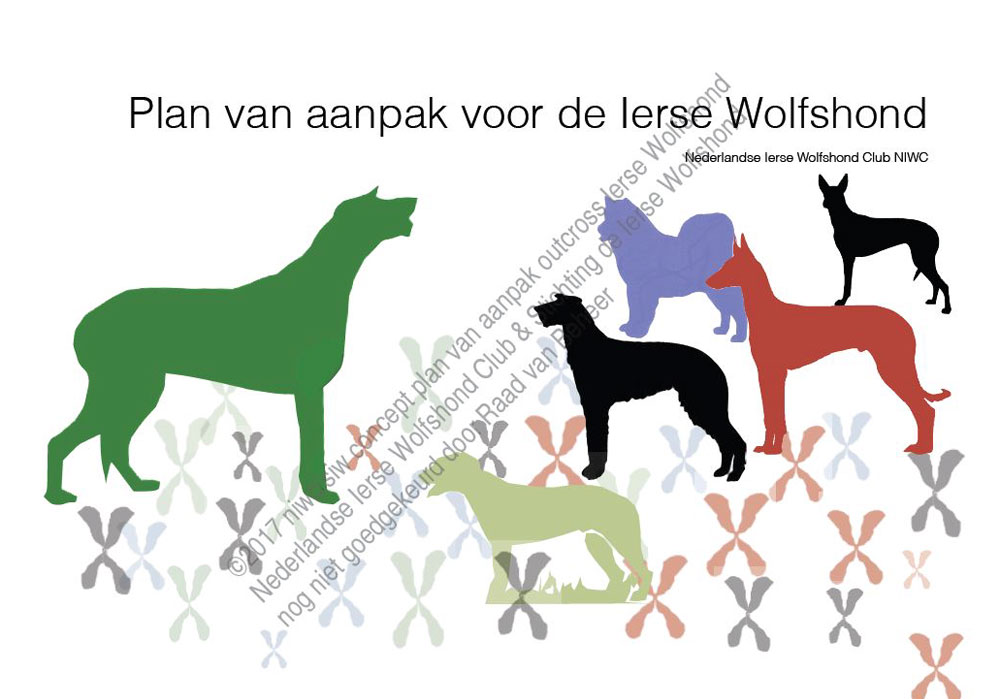